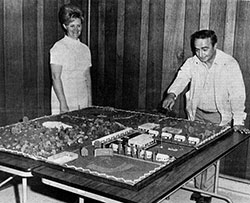 The Laborers' Training Center in Mt. Sterling, Illinois opened April 27, 1971. The facility was directed by a joint 12 member board of labor and contractor representatives, headed by Wilbur Freitag, who was vice president of the Laborers' International Union of North America. Tony Romolo was the administrator of the training center.

This particular location was selected from about fifty locations throughout the state by the board of trustees. They wanted the site isolated and located near Central Illinois on rough terrain and timber land.

The first graduating class was held on June 4, 1971. The LIUNA Vice President of the time, Wilbur Freitag, gave the trainees their certificates for passing the 6-week course. 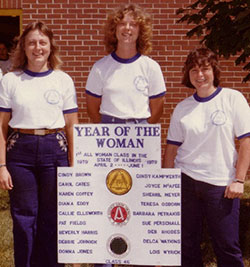 In 1979, the training center had an all-women’s class, which was the first one in the state of Illinois; the class was involved in the construction of the Freitag building, which is one of the main classrooms at the training center.

In December of 1981, The Laborers' Training Center celebrated its 100th class.

On October 14, 2000, the Laborers International Union of North America renamed the training centers facility in Mt. Sterling to the Anthony C. Romolo Training Center in honor of its long-time director.

In spring of 2004, ILCJATP held their first Workers' Memorial.

In early 2007, an empty Stanford school was purchased to be used for a second training center.

In April of 2007, the Marion Training Center broke ground. The 16,000 square-foot building was designed by the River City Design Group. The Grand Opening for the facility was held April 5, 2008.

From an elementary school to a laborers' training center, the Stanford Training Facility has made a significant transformation. The 32,000 square-foot building was previously a vacant elementary school and was purchased early 2007 by ILCJATP.

Since purchased, the training center has had many physical changes, including the addition of upgraded audio-visual equipment in each of the classrooms and revamping the gym into an indoor training arena.

The new training arena has made a more useful work space for the trainees. Since the changes, students can practice hands-on concrete and asphalt techniques inside. The area has been designed for the students to pour the material, set the forms, and perform demolition.

Ron Litherland, Apprentice Coordinator for the Stanford facility, explained the advantages of the training arena.

"Not only does the enclosed training area create a more useful workspace, but it also allows the students to practice their hands-on training when the weather doesn't cooperate," said Litherland.

In the addition to revamping the gym, ILCJATP staff has made plans to remove the wall from the southwest side of the gym and replace it with a 16-foot garage door. After the construction is completed, trainees will have the opportunity to operate heavy machinery in the training arena.

There are also plans to beautify the exterior of the facility. This work will include restoring the sidewalks and creating additional landscape. George Martinez, an instructor at the Stanford facility, said that the renovation will be a part of the hands-on training for future courses.

"The students will take pride in knowing that their training is being put to good use. The outcome of the exterior renovation will reflect their hard work and dedication." Martinez said.

The Stanford Facility is a great asset for laborers who live in central Illinois. Before the training center was purchased, trainees would have a much longer commute to the original training center, which is located in Mt. Sterling.

"The facilities location has made it possible for both the students and the instructors to be closer to home," Litherland said, "I feel very fortunate to have been involved with the Stanford facility from the start, and I look forward to being a part of it for many years to come."